FORESTAL VEGETATION
The vegetation of the wood is mainly characterised by holm oaks (Quercus ilex), which can be up to twelve metres high, and which cover the western sides along with Phillyrea latifolia, strawberry trees (Arbutus unedo), lentiscus (Viburnum lentiscus) and Viburnum tinus on calcareous soil. Silicious soil is instead covered with heather (Erica arborea), and cork oak (Quercus suber).
The eastern and northern sides are covered with holm oaks, Quercus pubescens, Fraxinus ornus, Sorbus domestica and Sorbus terminalis, thorn trees (Crataegus monogyna), ivy (Hedera helix), and Clematis vitalba.
The humid and shadowed soil of the under wood are rich in cyclamens (Cyclamen hederifolium and Cyclamen repandum), wild asparagus (Asparagus acutifolius), and liane (Smilax aspera).
Limited is the presence of laurel (Laurus nobilis), Ostrya carpinifolia and Quercus cerris. Quite common almost every where is the presence of maple (Acer monspessulanus). Rare and located only on the rocky cliffs is Pistacia terebinthus.
On the eastern side of the Uccellina Mountains, where the conditions are more favourable for the reconstruction of the wood, in areas where the maquis is very limited, there is myrtle, lentiscus, heather, strawberry tree, lavender and broom.
The maquis on the western side, which is more barren and drier, is covered with a mixture of holm oaks, lentiscus,liane and heather.
In the under wood there is daphne, and butcher’s broom.
In the rocky areas the maquis has developed according to the conditions of the soil: the type of vegetation that the tourist can find here is resistant to the dry weather such as arboreal euphoria, the exceptionally rare dwarf palm tree, and maritime savin.
The vegetation on the Uccellina hills is characterised by rosemary, pink heather, and lentiscus. In spring time, many varieties of wild orchids blossom in the scrub land contrasting with red earth.
Both the scrub land and the abandoned olive groves move spontaneously towards the maquis and this causes the progressive growth of thicker and thicker shrubs.

The sandy shores of the coast do not represent the ideal habitat for the majority of the plants due to the high level of permeability, inconsistency of the substrate and high concentration of salt. There are, however, types of plants and shrubs able to adapt to environments so high in saltiness and therefore able to use the remains of organic products transported to the beaches by the sea.
This type of vegetation is called “psammofila”, which means that it loves sandy grounds.
Cakile maritimum, Xanthium italicum, Euphorbia peplis, Salsola soda, Sporobulus pungens, are all types of psammofile and represent the first forms of pioneer vegetation. They are normally near the sea, where the sand is not touched by the waves. Inside the Park there are types of vegetation such as Calystella soldanella, Euphorbia paralis, Echinophora spinosa, Eryngium maritimum; they are all provided with radical apparatus which allow them to consolidate the sandy substrate which eventually will create a dune.
On the tops of the dunes it is possible to find Ammophila arenaria which, along with Anthemis maritimum, Pancratium maritimum, Otanthus maritimus, Medicago marina and other types of vegetation typical of the coast. They form the so called psammofila prairie of the dunes.
Next to the dunes there are also species which belong to more evolved environments. They create the so called prairie beyond the dunes.
The junipers represent the transition area which from the psammofile introduce to the vegetation of the maquis.

PALUSTRIN VEGETATION
In the first depressions beyond the dunes, with salty waters, it is possible to find a type of vegetation characterised by a variety of grass and palustrine low shrubs, such as Artemisia coerulescens, Carex extensa, Juncus maritimus, Schoenus maritimus and Schoenus nigricans. In the marshes it is possible to see Arthrocmum macrostachyum,Etriplex portulacoides, Limonium angustifolium and the rare Halocnemum strobilaceum. In the area which are seasonally flooded and in areas which were once swampy there are rushes and reeds. When the seasonal submersion is longer than usual other species appear, such as Claudium mariscus, Lynthrum salicaria, Arundo donax, Juncus acutus, Elymus pycnanthus.
Inside Trappola Marsh, on ancient edges subjected to seasonal submersion, the colonizing types of the dune are rather rare and often substituted by an arboreal covering which can be up to fifteen metres high, as it is mainly characterised by elms and ash trees.

ANTHROPICAL VEGETATION
The adjective anthropical derives from the Greek word Anthropos which means man, and indicates everything which is conditioned by the action of mankind.
Agricultural cultivations, abandoned olive groves, deciduous woods (which have been used in excess for centuries), and artificially implanted pine tree woods are all included in this type of vegetation. To grow the drained areas and shelter the agricultural lands from sea winds, there have been interventions during which the ancient dunes have been reforested mainly with domestic pine trees and maritime pine trees and occasionally with Aleppo Pine trees, which are more adapt to rupestral environments. This reforestation, promoted by Leopold 2nd of Lorena, has created the Pine wood of the Grand Duchy, which occupies six hundred hectares of the plain of Marina di Alberese. In its under wood, used for the cattle to graze, there are ever greens such as juniper, heather with pink flowers, lentiscus and myrtle.

In the Maremma park there are three species of wild ungulates: the wild boar, the roe deer and the fallow deer. There are other very important species from the point of view of the conservation: the wolf, the wild cat and the marten. Between common mammals there are the fox,  the badger, the stone marten, the porcupine and the hare and several species of small mammals. A rich variety of birds are in the protected area: the Park of Maremma in fact gives hospitality to over 270 species of birds, and wetlands are an important wintering area for many species of water birds. The areas in front of the Ombrone mouth have recently become important for the wintering of numerous wild geese and cranes. In addition, many important species nest in the area, as the snowy plover, the curlew and the European roller and in 2010, thanks to a reintroduction project, the osprey is come back. Among the birds of prey there are the peregrine falcon, the hobby, the kestrel, the buzzard, the marsh harrier and the short-toed; among the owls you can find the tawny owl, the barn owl, the owl and the scops owl. Other important bird species are the woodlark, which lives only in intact habitats, the tree creeper wich can be found only in mature woods and the green woodpecker which is a key species for the structural increase of cavities in tree trunks. 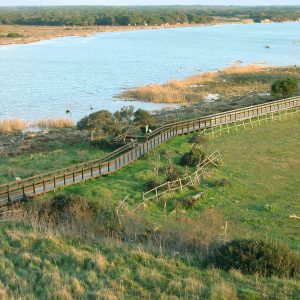 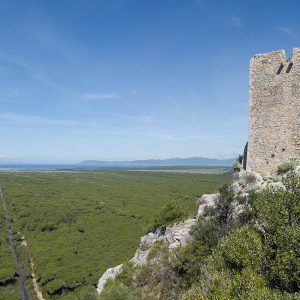 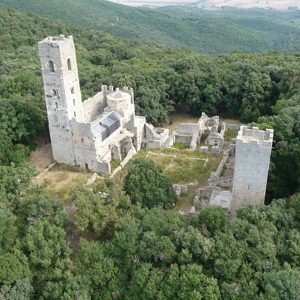 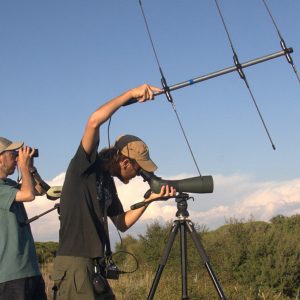